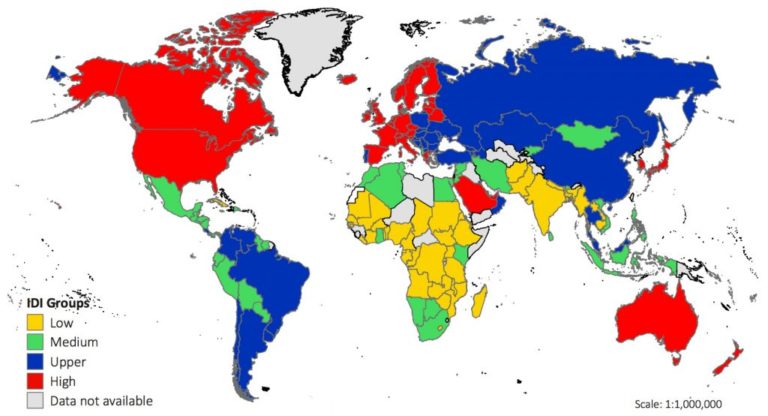 It’s well documented that IoT is one of the fastest growing industries globally, and a range of statistics have been published to back this up. IoT Analytics claim IoT devices will grow from 7 billion devices in 2018 to 10 billion in 2020. These stats don’t include other internet-connected devices such as phones and laptops, which in addition to IoT devices amounts to 17 billion. In contrast, IDC suggests by 2025 there will be 41.6 billion IoT devices. However, they define IoT devices more broadly, being a “uniquely identifiable ‘thing’ that can connect bidirectionally using connectivity.”

Despite the anomalies between these figures, most people are happy to accept that there are going to be a lot more IoT devices in the future. However, something that hasn’t been as widely documented is where these devices are going, who’s using them and potential markets that are overlooked. One may initially think that internet and IoT device use is concentrated in developed countries in highly visible markets such as smart cities, transport, medicine and agriculture. While this may have once been the case, we’re now seeing the internet becoming more accessible and commoditised than fresh water and food. In fact, 95% of the world has access to at least a 2G mobile network, and 69% have access to at least a 3G. Moreover, over 50% of IoT activity is used in manufacturing, much of which takes place in developing countries. These stats are surprising considering 2.1 billion people lack access to safe drinking water.

However, despite the large role of IoT in manufacturing industries, these stats do not address IoT devices per capita, meaning despite IoT being prevalent in factories, individuals and communities in surrounding areas do not have equal access to these resources. Developing countries are faced with many barriers to commoditising IoT technologies such as slower average internet speed connection, lack of knowledge to implement technology, financial barriers and outdated administration systems.

New research conducted by Cisco (2019) highlights these patterns through their analysis of the distribution of IoT devices globally per capita. Key findings include:

Currently, this is the forecasted growth of networked devices per capita per region:

Interestingly, IP traffic growth rates are significantly above average for the Middle East and Africa as well as APAC, two regions with higher representation of developing countries. The lowest IP traffic growth was identified in North and Latin America, probably due to the fact that 92% of the population of North America were already internet users in 2017. Nonetheless, the number of IoT devices per person is expected to nearly double by 2022 for North America, highlighting significant concentration of IoT’s growth in this region.

So, what are the implications of this research produced by Cisco for IoT providers and OEM’s?